Remaining consistent to the attitudes and aims of the First and Second conventions of Vojvodina, written in the documents „Subotica Initiative“ (Subotica, February 2005.) and „Constitutional Initiative of Vojvodina“ (Novi Sad, July 2006.) which have been roughly ignored by sheer antidemocratic way of bringing the current octroyed Republic Constitution;

Resolute in the common determination to point out the necessity of profound and complete changes of the present constitutional system of the Republic of Serbia on long-lasting bases and in accordance to the historic position in which both Serbia and AP Vojvodina have found themselves after the disintegration of the „second Yugoslavia“ and the disappearance of the federal states of SRY and Serbia and Montenegro, i.e. intending to point out the necessity of new self-constitution of historic constitutive entities of Serbia and Vojvodina into a joint, complex and internationally recognized state – Republic of Serbia, where the two will be integral and constitutionally equal parts;

Wishing to underline the most efficient ways and methods of bringing into being their strategically important aims, attitudes and political tasks that are the result of such goals,

At the constitutional referendum of 2006., Vojvodina firmly said NO to the current Constitution Act of the Republic of Serbia – due to the way of its passing and also its contents, and especially because of the position of Vojvodina in the Republic of Serbia. That Constitution does not give any guarantees to the autonomy of Vojvodina, but leaves her to the laws brought by the Assembly of Serbia by simple majority and in accordance to the instantaneous relation of forces within. By refusing such Constitution Act, Vojvodina has by plebiscite confirmed the attitudes of the First and the Second conventions of Vojvodina and the political aims of autonomist political forces active during the last two decades. In addition, Vojvodina has confirmed its attitudes by significant support to the pro-European political option, both on January presidential elections and on the May elections for the republic and province assemblies and local governments.

By such majority votes, the citizens of Vojvodina  have given substantional contribution to the victory of those forces in the Republic of Serbia, which have promised to accelerate the integration of our country into European community and emancipate it from Milosevic’s political inheritance; so – it voted for those political forces from which Vojvodina expects fundamental democratic reforms and new Constitution, which would include substantional essential change of the constitutional position of their Province.

Such expression of will by the citizens and nations of Vojvodina, and particularly their NO to the imposed constitution, have a much wider political and historic importance than it is a plain refusal of one octroyed constitution act.

The Third Convention of Vojvodina interprets this wider political and historic importance as follows:

VOJVODINA DOES NOT WANT

– monopoly of political parties in creating constitutive acts and bringing fatefully important decisions, as it is the right of all citizens and not only the political parties and its leaders;
– centralized and highly unitary organized state, nor uniform institutional solutions for different and specific communities and subjects;
– party rule over the whole of social structure, as well as the domination of partner party aristocracies in social events and public scene;
– forming the Government of the republic with one-party ministries and also one– party ruling in the wealthiest public companies with one goal: to share the plunder, on all the levels of government, which is a systematic precondition and source of  everywhere present corruption;
– domination of  executive over legislative and judicial power;
– unorganized and corrupt state and organized crime;
– reincarnation of clericalism and royalism;
– restoration of leader almighty authority, post-election triumphal self-importance and the autocratic reduction of clear support of the citizens of Vojvodina to the ideas o pro-European and pro-Vojvodina options to the support of singular political parties and its leaders;
– constitutional limitations to working, syndicate and social rights and the indifferent attitude of the power towards these rights;
– unscrupulous manipulation of the public by financial blackmail, personnel machinations and hiding or false presentation of data of public interest;
– continuation of two decade long misuse, drastic robbing and selling cheaply the resources , capital and property of Vojvodina;
– rapid fallback of Vojvodina in its development, and this annuls every perspective primarily to the youth within it, and also in its development in general due to the centralized system and bad governing of economy and state;
– beggar’s role of the provincial administration towards the executive power of the Republic and aggressive and humiliating glorification of the given „bits and pieces“;

– significantly different legal and constitutional system of the Republic of Serbia and the passing of the new constitution act, which would terminate the political system based on the Memorandum of Serbian Academy of Sciences and Arts and which would make the Republic of Serbia a complex state, with a constitution in accordance to the modern political theories and contemporary European practice. This includes a new historic agreement of equal historic and constitutive entities of Serbia and Vojvodina on their self constitution and association in a mutual, complex and sovereign European state;
– Republic of Serbia as a democratic, civilian, secular and decentralized country, as a common Republic with its constitution complying with natural and historic complexity of its being: this means its regionalization and strong local governing and the respect of the principle of subsidiary organization of power;
– constitutional recognition of basic political subjectivity and regional identity of Vojvodina and irrevocable and constant historic right of equal nation and citizens who live in it to decide on their fate independently;
– the right of Vojvodina to, in accordance with the new principles of legal constitutional system of the Republic of Serbia,  independently bring its own constitutional act, which would ensure the equality of nations and citizens in acquiring full autonomy of  their province; to organize and perform full legislative, executive and legal power; to manage its own development and controls its own natural and by its own work produced resources, as well as its original income and property;
– the right of Vojvodina to, based on its full equality with Serbia as constitutive entity and founded on its full historic, political and economic specifics and arguments, consolidate a long– lasting bases of constitution and future organization of a common complex state and take over its own part of responsibility for its functioning and development, for the strengthening of its territorial integrity, its lasting internal stability and international security, respect and subjectivity;
– the right and obligation of Vojvodina to secure full equality of minor nations in all its legal acts and thus guarantee all forms of minority autonomy in its optimal results within the frames of defined autonomy of Vojvodina in its constitutional act;
– forming a common strategy of lasting economic, political, regional and general social development of  the mutual state of Serbia;
– returning of  the property taken from the AP Vojvodina and local communities by the 1996. Law;
– return of the acquired and recognition of modern work and trade unions’ rights and developed social function of the state;
– the right of Vojvodina to give its full effort in repatriation and to be responsible for the policy of integration of those refugees who were in great numbers inhabited in these parts;
– quickened process of full integration of the Republic of Serbia into the European Union and other European integrations and the international community as a whole;
– peace, stability and agreed solving of all problems facing the state of Serbia today.

The Third Convention of  Vojvodina estimates that the positions from this Resolution can be accomplished by:

1. The support of the voters of  the parties oriented towards Vojvodina’s autonomy, as well as of those parties that recognize its right to full constitutional autonomy on the next provincial elections so as to gain a significant majority in the Assembly of the Province. Such Assembly could demand and engage itself decisively towards the recognition of Vojvodina’s political subjectivity, as a crucial starting point for autonomous proclamation of the constitutive act of Vojvodina and a new Constitution of the Republic of Serbia.
2. The Third Convention of Vojvodina expects that among the first those political parties which participated in it would be the ones, together with other parties of European democratic orientation in Vojvodina and Serbia and with the support of non-government organizations of the same orientation, will provide full cooperation in the action of gaining the majority on local, provincial and republic elections in Vojvodina and in the whole country so as to be able to perform thorough profound constitutional and social reforms, i.e. the goals defined in the Resolution of the Third Convention.
3. The Third Convention of Vojvodina, in accordance with such attitudes, firmly supports the strengthening initiatives in Serbia and Vojvodina of the political forces, more growing as we go along, who have publicly declared that they are against the way that the Constitution was declared and who are against its contents, to form a common movement for constitution – initiate an action to animate the public, to lobby and extort a pressure which would schedule the elections for the Constitution– making Assembly and bring new Constitution Act.
4. The participants of the Third Vojvodina Convention, who represent the majority of the voting body which has given a significant support to the victory of Boris Tadic and the parties of European orientation on the last presidential, parliamentary, provincial and local elections, expect the President of the Republic of Serbia to fulfill his pre-election promises with full responsibility and consider the supports, messages and demands of the Second and Third Vojvodina Conventions; this means – to initiate as soon as possible the change of the Constitution and the accomplishment of new historical agreement based on which the Republic of Serbia would be formed constitutionally in accordance with its complex being and the modern European standards.
5. The Third Vojvodina Convention estimates that it would be useful if a Resolution of the Assembly of the Autonomous Province of Vojvodina would be brought which would ensure a much higher responsibility of its members towards their voters and not only towards their political parties.
6. The Third Vojvodina Convention expects full support of European governments, institutions and democratic international organizations to its demands and orientations, because they support the implementation of the attitudes of the London conference, European Council, as well as those of Badinter’s and Venetian Commissions. Active support and aid of the international community would be considered as a contribution to the lasting stabilization of the region and therefore welcome by the Third Vojvodina Convention.
7. The participants of the Third Vojvodina Convention express their firm decisiveness to persist in their aims until they are democratically accepted and brought into being completely. Therefore they authorize and oblige the Initiative Board to organize the most efficient forms of coordination and cooperation in order to promote politically and internationally the attitudes and aims of the final document of the Convention and also to initiate cooperation with all political forces and institutions in the country and within the close surrounding, as well as those in the international community, who can accelerate its implementation. 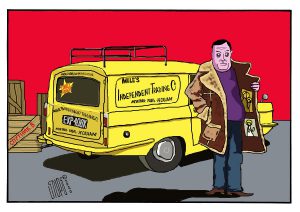