The Radicals, therefore, have lost Novi Sad, and have been defeated in Vojvodina, for consolation they may, as it seems, get Belgrade and the entire Serbia … Koštunica’s men north of the Danube and the Sava – complete with Velja – stand also somewhere just around the line of statistic error but in the end Ivica aka Fungus and company will as compensation be presented Belgrade and afterwards the whole Pashadom as bonus… The residents of Vojvodina, it seems, will be nervously spitting towards south and shake their heads saying, “Well, really”: however, it will not spare them from outcome of some new koshava from the Danube.
This is how gaining-and-losing dialectic looks in this country, and the costs of this bizarre plot are about to come to be paid. The price will not be low lest in the last moment a change occurs, at least in the shape of an “unexpected force that suddenly appears and resolves all”. However, we shall have more than enough time to think about it. That’s why perhaps it is more advisable now to concentrate on the “northern comfort”.
The fact that the Radicals and the Populists alike rated in the provincial ballots as would rate that American film piglet Babe if on tour in Iran, is quite natural, because Vojvodina’s “political people” (voters, to say) generally know and understand that, with these above dominating, the very purpose of any Vojvodina’s institutions would be nil: then they can be nothing but empty shell, as they were in the nineties, in that time when in Banovina ruled comrade Smiljanić of Apatin and similar Milošević’s luminaries. True, a cynic will say that this current omnibus-Vojvodina, neither fish nor fowl, is also neither institutionally nor “governmentally” established much better and this observation is not quite unfounded, but still symbolically and psychologically (not to go further) the importance of Vojvodina’s institutions will be best understood if one imagines the possibility of their total disappearance or their change (and shrinking) into something unrecognizable. That’s why an ordinary resident of Vojvodina is a much greater autonomist when voting for the Provincial parliament/assembly than for other levels of government: where else?! And if that house should be only a replica – and not a corrective, if it is needed as an opponent to the state Center of Power, then please piggyback the whole Banovina and take it straight to Slavija to fill in “Mitić’s hole”!
Okay, the Province is for many reasons invincible fortress for “forces of chaos and madness”, but what to do with Novi Sad? Hadn’t the capital of Vojvodina demonstrated and proved to be dangerously non-resistant to the Radical’s virus in the nineties as well as in the new Millennium! Oh yeah, it had. So, what’s changed? Nothing but that that, perhaps, should also change in the whole Serbia so that the large majority begins to see: those idle noisemakers came to power and, along with power, came responsibility. And how did it look like? Hmm, depends on the point of view. From their viewpoint it was something crazy and unforgettable: frolicking, going on sprees, binges and revels, traffic massacres, para-building orgies, a termite-like mass employing of sisters-in-law, brothers-in-law, nephews, nieces and other cousins of all sorts at virtual but well paid working places at our expense … From viewpoint of others, it was equal to natural disaster and I don’t dare even to think how it would have been if Maja G. hadn’t become a renegade, which in some places caused a slight disturbance and braking. No, it is not the question of the Radicals as ones who in Novi Sad invented theft, nepotism and similar temptations that mortals face, it is that they indulging in it had neither measure nor shame nor style. And also they consistently had been taking a good care not to, either in passing or collaterally or at least in error, make something of lasting purpose and something good for Novi Sad by which perhaps somebody would remember them. Except if somebody thinks that we should be grateful to them for that fountain-like miracle in the Catholic Port or because they made that pretentious building contractor from Krčedin to erect on a meadow in the close vicinity of Novi Sad a sort of a lastingly landed UFO and called it, what a scream, the “Intercity Bus Station”. True, I must say that it is inter-city: you can travel from there even as far as Novi Sad! Though it is not advised, travel is quite long.
Thus it happened that even many “traditional voters” of the Radicals experienced a sort of profane enlightenment: look, look, it seems that those ones who are the loudest are not the cleverest, the most capable and the most honest! So those more courageous among them ventured and voted for some more normal option (even if it was “Our Maja”, as a transition form from tribal and pre-political to civic and political voting) while those feebler ones did for the general interest at least as much as to have remained at home. Thank you all for that, from where it came, splendid. Here, in the second round of the Provincial elections only Mr. Zigor managed to squeeze through and that – he knows, devil, where a sore point is – in the voting district Veternik-Futog, notorious by its political subtlety of the Scandinavian type. As I’m not one that easily forgets, I would suggest punishment for the inhabitants of Futog and Veternica in the form of Milorad Mirčić who would next four years read every evening one fairytale to their children for good night. Alas, why children, they are not guilty, they don’t vote as yet! Just so, to make them learn in due time. 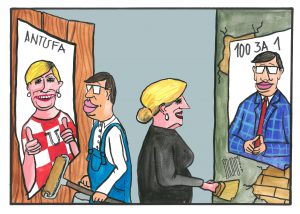